Apparently I've been neglecting my blogging duties. Many apologies. Where does the time go? Anyway... 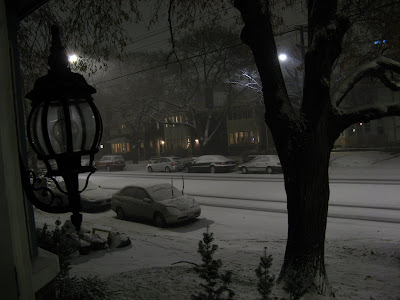 ...here are a couple of pictures of Toronto's first hard snow fall of the year. The first two were taken last night on the front step of the house just before bed at approximately 11:00pm. The second two were taken the next morning at about 7:45am. Beautiful, eh?
If one wants to experience snow in San Francisco, one drives to it. To that extent, I am still feeling quite the Californian. What is this white stuff outside my windows? I haven't driven to Lake Tahoe or Yosemite Valley! 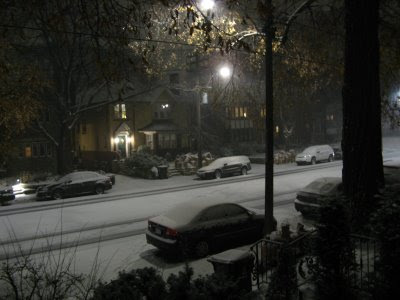 Aside from that which I drove to at Tahoe and Yosemite, the only other snow I've dealt with in the last six years was a flash storm in Portland, Oregon.
I will undoubtedly have to get used to this again. Luckily we have been told that our drive is professionally plowed. At least that is one chore I don't have to acclimate to again. I hope. A plow has yet to be seen. 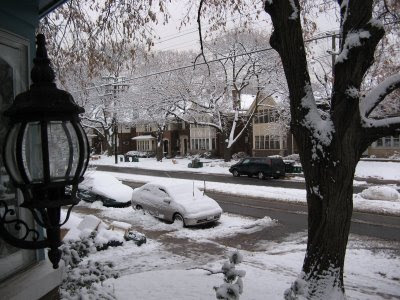 I am looking forward to learning how to cross country ski. Eric and I joined an outdoor activities/social club and I am hoping to connect to a group within willing to deal with a novice.
I wonder how much snowshoes cost? 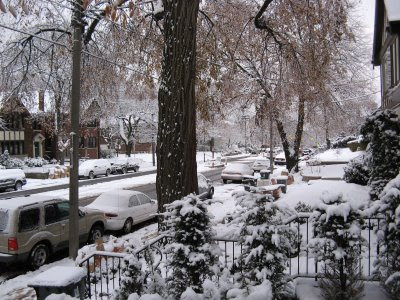 Oriole Parkway, Toronto, Ontario, Canada
Posted by Adam at 11:06 AM

I don't know if you were serious, but I just wanted to put in a vote for snowshoeing. I love it! You can get a really decent pair of recreational snowshoes for between $150 and $200. And, there are probably places in your area where you can rent them to check it out. Happy winter!

Serious? Surely! Hope you are enjoying the new house!

Oh just you wait, this is only the beginning. Now that you are becoming Canadian we have to introduce you to Curling. Did you know Toronto has TWO Gay Curling Leagues?

Mason wants to plan a ski weekend to Blue Mountain or Mont Termblanc in Quebec. I'll be in the lodge sipping hot cocoa and schnapps but it'll be fun watching you boys come screaming down the hill

Warning on curling; it is addictive. My wife is on a league and spends at least one night a week on the ice. She swears it is a lot more excercise than it looks.

It snowed quite a lot for a day in Ottawa mid-October, but nothing since. Just a few flakes here and there... which is good cause I'm still sore from last year's shoveling. :D