My activities of late have centered around painting several rooms of our flat. To that end, I've been inside a lot and haven't taken use of the car during the day in a week or two. With my brush strokes finished for the time being, I decided to drive my partner to work and despite not really needing the car, to have use of it to distance myself from home.
Coffee...
...I love the stuff. I have to give a tip o' the toque (a shake of the fist?) to my former room mate and good friend John C., who, every morning for the year he lived with me, faithfully brewed a full pot o' joe. I am now as addicted as anyone, thankyouverymuch - though I do have to say the machine gets a good amount of rest since I discovered Tea, Earl Grey, hot. A future blog posting for sure... 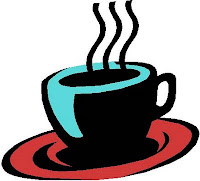 So, this morning I drove my Eric to work and then headed to the Starbuck's on Laird in Leaside to read the Toronto Star and enjoy a cup of coffee and an apple fritter. I like this particular shop because there is a small parking lot. This means I don't have to feed the parking meter.
I arrived and parked. There was a car in the next space with its hood up.  A woman was quenching her very needy vehicle's thirst for windshild wiper fluid - an activity I had recently done with my own. Have you ever driven with an insanely dirty windscreen? I remarked on my way into the coffee house how much more pleasant driving home for her would be and small talk ensued regarding my gas-electric hybrid SUV and, also, what has "lovingly" been described by my former auto mechanic as "idiot" lights -dashboard icons that illuminate after something breaks or fails on your car.
Anyway, she had very nice energy and I enjoyed the interaction. I also enjoyed the coffee and fritter that she spontaneously bought for me inside when we both reached the counter. How thoughtful. Moments later she said, "goodbye," left, and drove away. It could've happened anywhere at any time; I know. But it happened here in Toronto. And, since my partner and I moved to T.O. from California four and a half months ago, we have had many other similar interactions with random folk here in our new land. Is it all about (aboot?) a more polite, considerate Canadian culture? Hmmmmm.
Posted by Adam at 11:52 AM

Wow, very nice meeting in Toronto. All we tend to hear of Toronto on the news here in BC is the bad stuff. Thanks for sharing the good stuff. We too have found people SO nice and friendly but nobody has bought us coffee and a fritter. You are very lucky indeed.