Hindsight on the Immigration Process 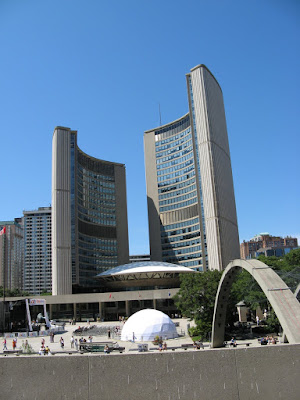 Eric and I have now been in our Toronto flat twenty plus days. Nearly all of our belongings are unpacked and after weeks/months of complete disruption we have a functional home again. There are hints and glimpses of a new routine emerging. A much healthier diet is being consumed - healthier for me than the one I had in California! I am even exercising regularly! I would like to think that we have caught up on our sleep and are once more breathing properly. There are still a couple of critical tasks to accomplish but most have been completed. The light at the end of the tunnel is becoming very bright.

Though it might not seem so to those we know who watched it transpire, the time frame of our immigration process was incredibly short. There was absolutely no way we could have successfully navigated it without a massive amount of research beforehand. Much of the information gathered was done through the official Government websites of the U.S., Canada and Ontario. A lot more was done off of the blogs of experienced U.S. to Canada immigrants. Their advise was critical in many respects.

It is wonderful to live in the moment. Sometimes it doesn't take a crisis and one is fortunate enough to experience this through "benevolent" acts of their own - yoga, meditation, sports, painting, drawing or any of the arts come to mind. Immigration has been like that for me. Planning, completing the necessary actions, following deadlines - it's been nearly 24/7 for months. I admit I exaggerate a bit - there's been some down time interspersed between the completion of the tasks, applications, documents, forms, phone calls, etc. But there was always to-do and follow-up lists. Additional items were continuously being added to both. And it was all either critical to successful immigration to Canada or it's mere possibility.

Has all this ended? Is the immigration process complete? As I mentioned above and in prior posts - not exactly. We can live and work here legally for two years. We now have to wade through the current Canadian immigration environment to gain permanent residence. If that takes more than two years we can renew our work permits. I'll keep y'all* updated.

Many U.S. to Canada immigration bloggers have pulled information from a variety of sources and included it in their writing. This bevy of knowledge and experience can greatly reduce the work and stress of future US2Canada immigrants. Eric and I now have an intimate familiarity with the temporary work permit, border crossing and post-landing processes. If you are interested in such things, stay tuned and keep reading.

* I am a native New Yorker and have never lived in The South.
Posted by Adam at 11:09 AM