Eric and I spent a week in Las Vegas, Nevada. I had the pleasure of making the entire seven days a holiday. Eric had a work conference for all but an extended weekend - we tacked on a couple of extra days so Eric could enjoy himself a bit. We did as most do; gambled and casino crawled. We saw a show. We walked around aimlessly. I had quite a bit of time without Eric. I spent one afternoon at Red Rock Canyon where there is a thirteen mile loop drive with several scenic view parking stops. Not too exciting but something other than gambling to do. 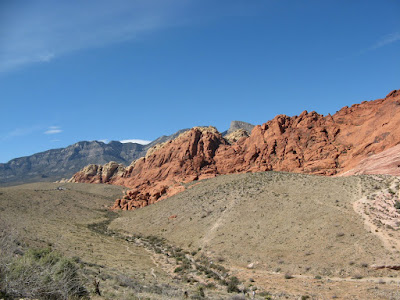 Red Rock Canyon, Las Vegas NV
We didn't stay on the strip. The conference was being held at the Red Rock Resort and Spa which is on the very far Western edge of town, about twenty five minutes from Las Vegas Blvd. and all the glitz and to-do. We rented a car which I got most use of. The weather was rather chilly. I should have brought a light jacket or a hoodie. My bad. Though the resort had a very nice pool it wasn't much use. Despite some good sun there was too much wind and chill.
We hit many of the casinos including: Bellagio, Caesar's Palace, The Winn, Luxor, several others the names of which I can't remember. Several again which were smaller and less impressive. Gambling isn't my or Eric's thing, but we did enough of that. We both won some money. And lost some money. The good news is we managed not to spend a good portion of money which was otherwise destined to be gambled away. More money for our upcoming San Francisco/Bay Area trip, I suppose.
Eric's sister and brother flew in from San Francisco to join us for a couple days after Eric's conference was over. They roomed on the strip. We all had a good time.
A week in Vegas is too long. Three full days is good. Even four might be pushing the limit. Some casinos are better than others. I decided I prefer those that are set back off of the street. Those that are flush with the sidewalk seemed older, dirtier, tighter. The fountains at the Bellagio were a highlight. "Singing in the Rain" played over the speakers during a short sprinkle. The fountain show is impressive. I also enjoyed "The Fremont Street Experience" - two street blocks covered overhead with an LCD screen. Replete with casinos such as The Golden Nugget, shops and restaurants, Fremont St. is in the old Vegas downtown and is almost more enjoyable than the strip. Vegas has a monorail which the four of us took to the Stratosphere, an observation tower at the North end of the strip complete with "amusement" rides over a thousand feet in the air. While Eric and his siblings chose to be frightened to death by being catapulted and hung over the city, I opted out of the insanity. Unfortunately I was denied "Star Trek: The Experience." Apparently the attraction closed at the Hilton and is soon to reopen somewhere near Fremont St. Bummer. My inner geek is so disappointed. :-(
I think that about covers it all. I didn't take many pictures and will post the best ones when I have a moment. We're both looking forward to the trip to San Francisco in May. Ten days to hang with friends and family in The Bay Area. I can't wait!
Posted by Adam at 3:36 PM

Unless you are from Las Vegas, then visiting for a week is not nearly enough!

Well, CC, you certainly have stamina. I'd sound like a whiny baby if I defended my "three or four day max" statement adequately so instead I'll acquiesce. You clearly must know something I do not. Though I have to say the next time I stay in Vegas I will look to stay at a "family" oriented resort or B&B. One can always go down to The Strip when one has the urge...and despite being an extrovert, the crowds eventually got to me.